Anna Roberson’s mother went to school with Garry Drummond. Why in heaven’s name would anyone do an act of vandalism against a respected, elderly woman?

The vicious diatribe and back-and-forth regarding the treatment of ex-Drummond executive David Roberson and his wife Anna has hit a new low.

Anna Roberson’s 90-year-old mother returned to her home in Jasper last week after a hospital stay to find the windows of her home shattered, both in the front yard and backyard.

Nothing was stolen from the home. Nothing.

Was it a message of intimidation and fear? 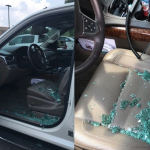 Last summer, thugs smashed the car window of the wife of Burt Newsome, the attorney who has been fighting Balch & Bingham for over 6 years and represents the Robersons. Law enforcement believed at the time that she had been specifically targeted. After seeing the actions by the thugs, law enforcement’s first question to Mrs. Newsome was, “Do you have any enemies?”

Anna Roberson’s mother went to school with Garry Drummond. Why in heaven’s name would anyone do an act of vandalism against a respected, elderly woman?

We understand that the betrayal by Drummond CEO Mike Tracy—who fired David Roberson in February and cut off Roberson’s charity of choice 12 days later—has spurred enormous controversy in Walker County and on Facebook.

But now the situation has gotten way out of hand.

Mike Tracy must show leadership and condemn this act of cowardice against the elderly mother of someone he once considered a friend.

Tracy can either show true grit or true pettiness.