Did Federal Judge Abdul K. Kallon agree to a secret deal to keep Alabama Power “unmentionable” during the North Birmingham Bribery Trial because of his past financial agreements and possible embarrassing personal behavior?

After dropping a bomb by exposing the multi-million-dollar secret contracts between Alabama Power and “Sloppy Joe” Perkins, the investigative news site DonaldWatkins.com has landed another punch:

Abdul Kallon was an attorney with the prestigious Birmingham-based law firm of Bradley Arant Boult Cummings, LLP (Bradley Arant) from 1994 until President Barack Obama nominated him to the federal bench on July 31, 2009. Kallon and his law firm provided legal services to a Birmingham-based non-profit healthcare organization headed by Birmingham businessman Jonathan W. Dunning that became the focus of a federal criminal investigation in 2013.

Judge Kallon and Jonathan Dunning were also very close personal friends. Kallon was a bachelor when he and Dunning met and developed a professional and personal relationship. Dunning was married with children, but he also had a longtime relationship (and two children) with a woman outside of his marriage.

Kallon and Dunning engaged in social activities, some of which could have been extremely embarrassing and compromising for a sitting federal judge if they had been disclosed publicly or discovered by local political operatives who trafficked in exploiting the “dirty secrets” of public officials.

Was DonaldWatkins.com referring to the obscure political consulting firm Matrix or not?

Matrix has a legendary if not mythical reputation of being the hired guns that allegedly dig up dirt, orchestrate AstroTurf campaigns, and tar and feather perceived opponents on behalf of Alabama Power.

Besides the personal dirt, did Kallon have financial agreements that could raise eyebrows? 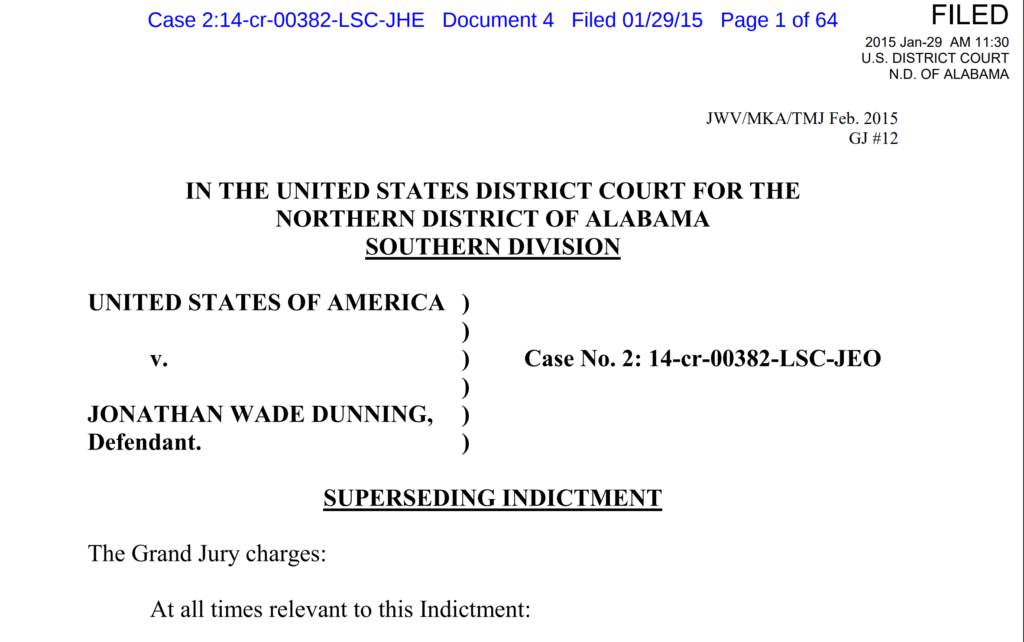 In 2014, a federal grand jury in Birmingham indicted Dunning on 112 counts of conspiracy, bank fraud, wire fraud, and money laundering. Federal prosecutors claimed that Dunning diverted $14 million in federal grant money from BHC and CACH over a period of seven years and used this money to support his private businesses and personal lifestyle.

Dunning’s Synergy Medical Solutions provided a wide range of professional services and products to BHC and CACH (e.g., patient billing, healthcare management services, medical supplies, etc.), all with the knowledge and approval of the board of directors of BHC and CACH, Kallon, and Bradley Arant.

In 2006, BHC purchased the Medical Plaza building in Birmingham for $2.6 million and used it for BHC’s headquarters. In 2007, Dunning formed SREH, which purchased the building from BHC on February 28, 2008 for $2.8 million. Upon the closing of the purchase, BHC leased-back space in the building as a tenant.

In support of their fraud charges, prosecutors claimed that Dunning secured an internal appraisal that was prepared for SREH at this time that valued the building at $6 million.

On February 25, 2008, Kallon and Bradley Arant presented SREH’s initial proposal to purchase the building for $2.5 million in a meeting of BHC’s board of directors. BHC rejected the $2.5 million offer and counter-offered to sell the building for $3.2 million, which was the value reflected in BHC’s internal appraisal of the property.

On February 28, 2008, board members voted unanimously to accept Dunning’s final offer of $2.8 million. Prior to the vote, BHC board treasurer Terry Burney noted that Dunning’s offer was “90% of the appraised [$3.2 million] value for the building and represented a fair and reasonable offer.”

Throughout it all, Kallon and Bradley Arant advised BHC that Dunning’s purchase of the building and lease-back arrangement were legal.

On August 1, 2008, Kallon invested $56,000 in SREH for a 2% equity interest in Dunning’s office building. The purchase price reflected the $2.8 million valuation for the building.

After Kallon became an equity partner in SREH, he and Bradley Arant continued to represent BHC in its dealings with Dunning’s private companies….Kallon did list the money he received from SREH on his annual judicial disclosure forms.

On October 18, 2012, in response to a media inquiry regarding Dunning’s purchase of BHC’s office building, Kallon affirmed that Dunning’s acquisition of the property was perfectly legal. By this time, Kallon was a sitting federal judge and Dunning’s business partner in the building.

Even though Abdul Kallon and Bradley Arant represented BHC’s legal interests in the purchase transaction and other business relationships involving Dunning, neither Kallon, nor Bradley Arant, were charged as co-conspirators in Dunning’s case.

After Judge Kallon and Bradley Arant became aware of the “secret” grand jury probe of the BHC-Synergy business deals in 2013, Kallon sold his interest in the office building back to Dunning at a “significant loss.”

Following a trial in May and June 2016, Dunning was found guilty on 98 of these 112 counts. In October 2016, Judge Rothstein sentenced Dunning to 18 years in prison and ordered him to pay restitution of $13.5 million.

With this financial investment and alleged personal misbehavior, did any, all, or none of the Three Stooges (Alabama Power, Balch & Bingham, and Drummond Company) squeeze Kallon by his testicles to agree to the “unmentionable” accord?

Were any, all, or none of the Three Stooges assisted in the squeeze by disgraced ex-U.S. Attorney Jay E. Town who met with Mark A. Crosswhite, CEO and Chairman of Alabama Power, for cocktails at the Moon Shine Lounge?

Was Kallon used, abused, and exploited because of his past?

Since October we have been told that there is an alleged federal investigation of obstruction of justice involving Crosswhite and his goons.

Many observers are in disbelief that fear and intimidation can be exercised in the halls of power, against a sitting federal judge.

Is Kallon cooperating with federal investigators? And more importantly, did he wear a wire?