[This post was originally published on February 8, 2018. Today with the conviction of Balch & Bingham  partner Joel I. Gilbert on all 6 counts, this message is more important than ever. Changes from the original post are made in purple font.]

There are many professional, ethical, and outstanding professionals working at Balch & Bingham and we applaud you.

We, the CDLU, are not against Balch & Bingham; we are against racism, discrimination, and unscrupulous if not criminal behavior. We seek to promote inherent goodness, and expose unconscionable corporate conduct and inept government behavior.

Two Balch & Bingham partners were indicted in September because of an alleged bribery scheme. Steven McKinney was acquitted but Joel Gilbert was found guilty on all 6 charges. The management at Balch should have fired them on the spot; instead they gave them an indefinite leave of absence.

Another Balch & Bingham partner was fired last March of 2017 after we exposed his alleged egregious and insidious conduct in an alleged conspiracy. The management at Balch should have settled the matter on the spot; instead they created a Star Chamber court to allegedly hide possible criminal acts or perjury  indefinitely.

In recent weeks, we have seen enormous spikes of interest in our posts and have had record-high readership on our site.  Many readers  that we can identify are from Balch & Bingham— you and your fellow colleagues.

Many of you have visited our anonymous tip line, some have reached out to us; some have hesitated. Do not be afraid. We will protect your confidentiality.

Now a real story about CDLU’s Executive Director and Deputy Director from 23 years ago. Both were working for IADE American Schools teaching ESL to the immigrant residents of the inner-city neighborhoods of Los Angeles.

After not being paid wages in a month, they began to investigate and learned that the company was involved with blatant criminal fraud: taking government grants for “ghost” student who had never enrolled. 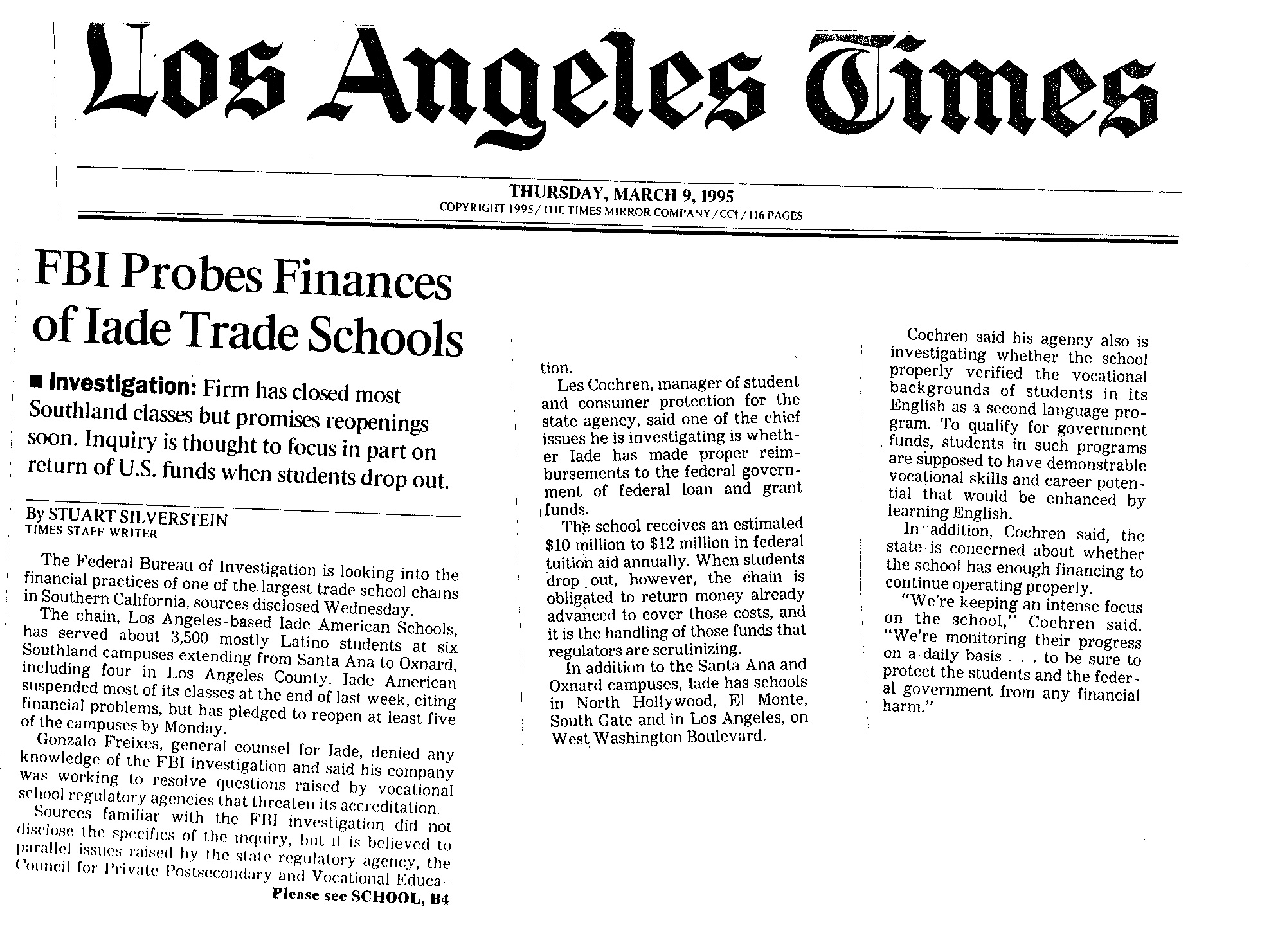 After confronting management, employees banded together and collected a foot of documents showing the criminal fraud.

Our Executive Director, just a 20-something-old teacher then, met with the FBI and two weeks later a raid was  made.

The arrogant management fled abroad or were arrested. Some were sentenced to 10 years in federal prison.

Although our Executive Director and Deputy Director both lost  their teaching jobs and were never paid back-pay, they immediately worked closely with state authorities to have a hotline set up so students could be transferred to another learning facility. Waiting indefinitely on the sidelines would have been detrimental to their students.

Inherent goodness was what they sought.

No job is worth going to prison for. No job is worth being associated with or engaging in immoral, unscrupulous, or even criminal behavior.  We have a right to confront management and demand the highest professional standards and best business practices.

That is probably why 10 of your money-making colleagues left in January.

As the old song goes, “Which side are you on?”